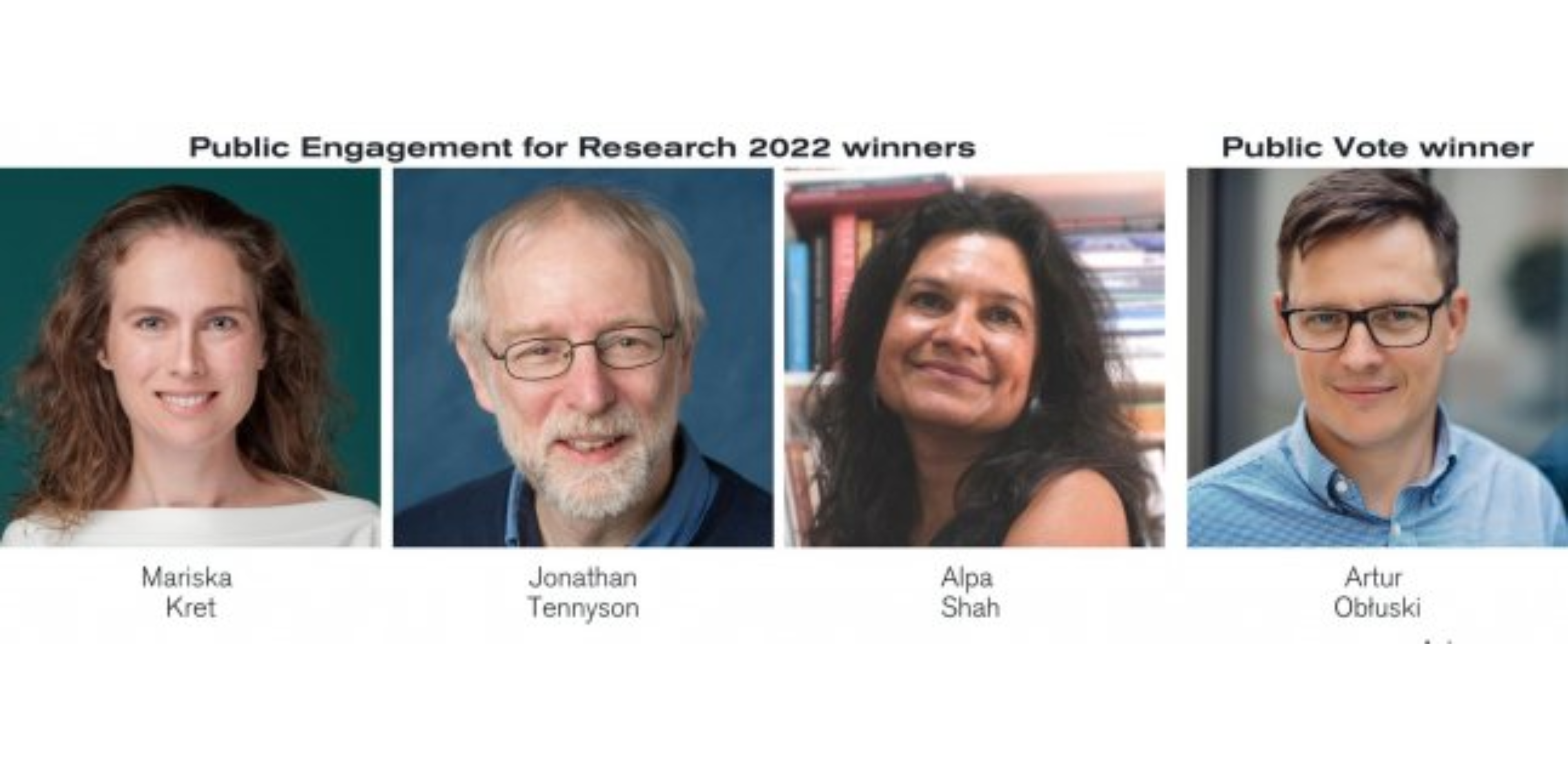 The names of the laureates have been announced in an award ceremony at the EuroScience Open Forum (ESOF) in Leiden, the Netherlands. The purpose of the award is to recognise ERC grantees who engage with audiences beyond the scientific community.

Mariska Kret from Leiden University received the award in the category “Involve – citizen science.” Her project RecognizeYourself used citizen science at a zoo, involving the general public in the study of emotions of great apes. Dr Kret and her team were able to engage people in their research and helped them understand the importance of emotions in both humans and our closest animal cousins.

Alpa Shah from the London School of Economics and Political Science was recognised in the category “Influence – media and policy.” Through her project CounterOppression, Prof. Shah managed to increase public awareness of the intimate relationship between economic growth, class relations and identity-based oppression and exclusion in India. She also resolved? to improve policy, reaching out to a broad set of policy actors, such as NGOs, the UN International Labour Organization, and UK Members of Parliament.

Jonathan Tennyson from University College London received the award in the category “Inspire – public outreach.” with his project Orbyts. He successfully involved school students with real research led by PhD mentors. The teamwork in schools with low STEM take-up, which afterwards reported widening access to education in physics, boosting pupils’ confidence in these fields and broadening the uptake of science in the curriculum, particularly in underrepresented groups and girls.

Artur Obłuski from the Polish Centre of Mediterranean Archaeology discovered the remains of what is probably the largest church known from medieval Nubia in today’s Sudan. His team worked together with local communities and the Sudanese heritage agency to raise awareness, promote, study and explore ways to use this heritage for sustainable development, and to place it on the UNESCO’s World Heritage List. His project, NAFEER, received most votes in an online poll in which more than 5,000 people took part.

The call for the ERC’s Public Engagement with Research Award closed for applications on 8 February 2022. The ERC received 67 applications from 17 countries. A pre-selection was organised to choose the best proposals for the jury review. The Jury of the award, composed of experts in public engagement and science communication, consequently selected three winners. Each laureate of the three award categories receive a prize of €10,000 in addition to the public recognition.

The ERC, set up by the European Union in 2007 and marking its 15th anniversary this year, is the premier European funding organisation for excellent frontier research. It funds creative researchers of any nationality and age, to run projects based across Europe. The ERC offers four core grant schemes: Starting Grants, Consolidator Grants, Advanced Grants and Synergy Grants. With its additional Proof of Concept Grant scheme, the ERC helps grantees to bridge the gap between their pioneering research and early phases of its commercialisation.

The ERC is led by an independent governing body, the Scientific Council. Since 1 November 2021, Maria Leptin is the President of the ERC. The overall ERC budget from 2021 to 2027 is more than €16 billion, as part of the Horizon Europe programme, under the responsibility of the European Commissioner for Innovation, Research, Culture, Education and Youth, Mariya Gabriel.