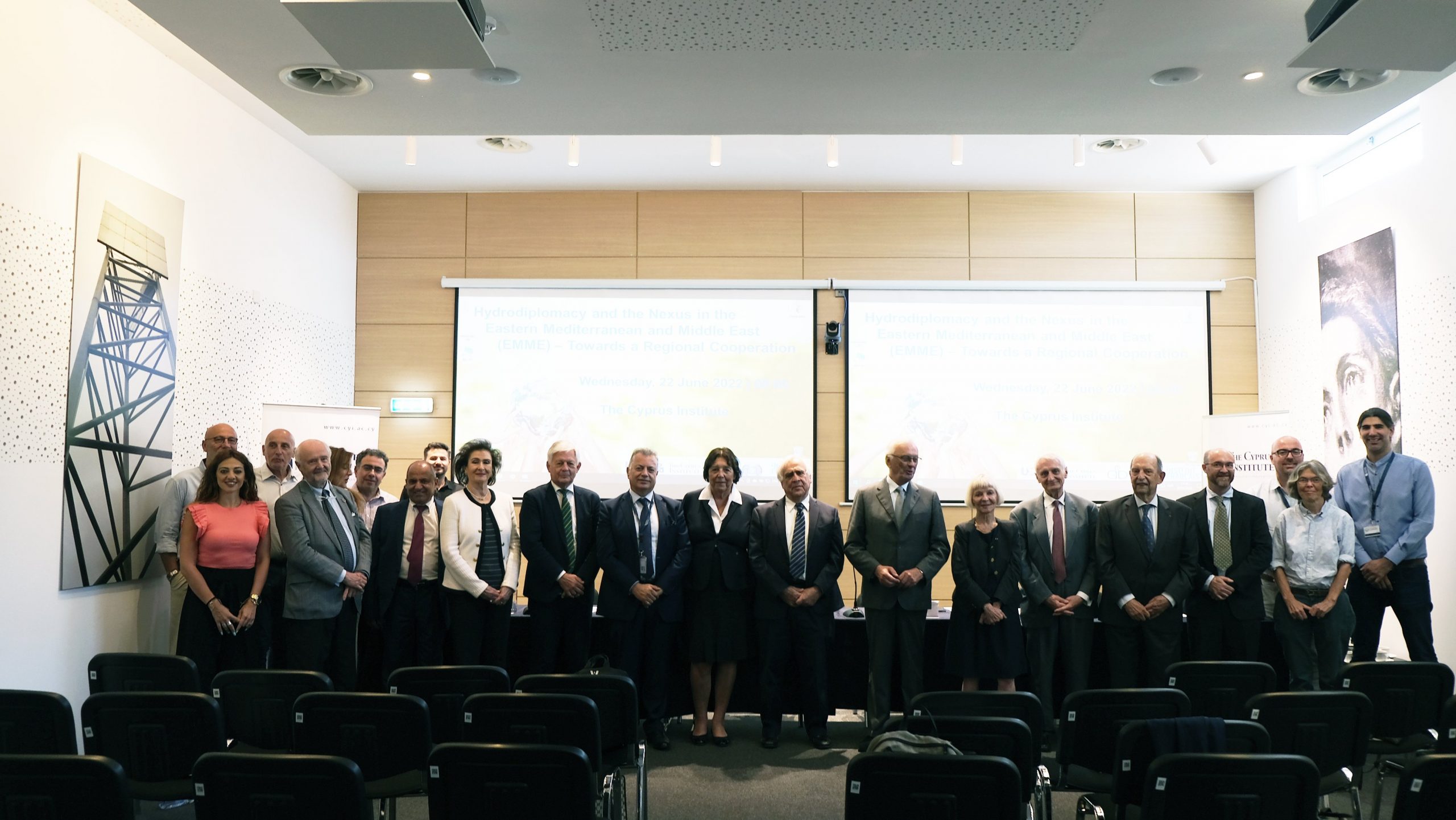 On Wednesday, 22nd of June 2022, The Cyprus Institute (CyI), the Inter-Academic Group for Development (GID) – an International Association consisting of Academies from Southern Europe and the African continent with the ambition of “mobilizing knowledge in the service of a true Euro-African co-development” – along with the French Embassy, the French Institute of Cyprus, and the Academy of Overseas Sciences ASOM, co-organised the Conference entitled “Hydrodiplomacy and the Nexus in the Eastern Mediterranean and the Middle East (EMME) – Towards a Regional Cooperation”.

The event was held at CyI’s premises in Nicosia, under the auspices of the French Presidency of the Council of the European Union and the Cyprus Government Initiative for Coordinating Climate Change Actions in the Eastern Mediterranean & Middle East region (EMME-CCI). Hosting the Conference on behalf of The Cyprus Institute was CyI President Prof. Costas N. Papanicolas, and EEWRC Director and Hydrodiplomacy Expert, Prof. Fadi G. Comair.

The attendees, who met to exchange, consolidate their know-how and to share their experiences in the field of water in the Mediterranean, had the opportunity to discuss innovative solutions and recommendations for better integrated management of national and transboundary watersheds in connection with the “Hydrodiplomacy Partnership Program” (HPP), initiated by The Cyprus Institute, as well the role of agriculture in the more general connection between Water-Energy-Food and Ecosystem Nexus.

In her opening statement, the French Ambassador said that her presence at the Conference is symbolic and a sign of the very strong cooperation between The Cyprus Institute and the French Institute in Cyprus, and the French Embassy. She continued by mentioning that “water is vital, common good, and it should be managed sustainably in order to ensure its accessibility for future generations. Hydrodiplomacy is an essential tool to promote cooperation and peace”.

H.E. Olivier Cadic, Senator representing French citizens abroad, stated that “sustainable management of water will give hope to the countries of the EMME region. Hope for better tomorrow and for better understanding of the climate change challenges via proposing solutions”.

The event was a day of reflection on the impact of conflicts, which within the context of Climate Change, generate risks for both cultural and natural heritage. Additionally, the attendees discussed over the Action Plan for the adaptation of water policies proposed by the Water Working Group of the Cyprus Government Initiative (EMME-CCI), and regarding the unconventional waters (resurgence of sea water), as well as they discovered methodologies and tools for the application of good governance on transboundary water resources in order to preserve, restore and enhance our cultural and natural heritage, towards the sustainable development of Mediterranean countries.

On the occasion of this initiative and in order to strengthen the exchanges between the different experts who were present at this Conference, The Cyprus Institute and the GID launched a collaborative platform in order to secure a place that will engage experts to share experiences related to water management, pollution monitoring, as well as a place to discuss research projects on innovative solutions and strategic partnerships with regional organizations, such as the CIHEAM (International Centre for Advanced Studies in Mediterranean Agriculture), and ECOMED Academy initiated by UNESCO-IHP, W-SMART and CyI, in which The Cyprus Institute will be participating as a hosting institution. This platform will be also dedicated to the results of archaeological research in the Mediterranean area, and in particular to their management, preservation and enhancement.

The Conference closed with the signing of the declaration for launching a Platform for Water Management in the EMME Region. The declaration was signed by GID President, Mr François Guinot, and CyI President, Prof. Costas Papanicolas.

Mr Guinot noted that “this agreement is only the beginning and we certainly have a lot of cooperation to establish in order to address important problems in the Mediterranean. We know that The Cyprus Institute is performing at a very high level on very important matters, and we are very interested in translating this important research in practical effect”.

Prof. Papanicolas stated that “this renewed declaration, formalizes a renewed promise to work together not only for Hydrodiplomacy, but to preserve our environment, our cultural heritage. Climate Change gives many opportunities to deal with very big challenges and I hope that we will all contribute via providing practical solutions”.

The Conference was followed by a public lecture entitled “Future Challenges for the Mediterranean for 2050 in the Fields of Sustainable Development and Human Well-being”, delivered by University of Limoges Professor, Michèle Gendreau-Massaloux. In her lecture, the distinguished expert elaborated on the crucial targets identified earlier at the Conference for building a more inclusive and human welfare around the mare nostrum, with many projects devised, useful proposals made, and the new aims and goals of a common involvement designed and discussed in an open-minded way.

In her remarks, Prof. Gendreau-Massaloux discussed the various instruments we can seize and use in order to move from analysis to efficient action. She explained that in as much as all Mediterranean countries are confronting environmental problems (access to water and sustainable development being at the forefront), they have a vested interest in sharing not only diagnosis, but also solutions.

“Our common goals need to be pursued at three complementary levels, each of them being as important as the other two. The political level, for general orientations which will be undertaken by the Union for the Mediterranean, with its specific programs for water and environment, energy and climate action, transport and urban development. The level of public policies, necessary to develop frameworks for combining national public policies and international cooperation; this is the case of “Le Plan Bleu” and the Center for Mediterranean integration. The level of training which should aim at providing individuals or groups with knowledge and skills. Exemplary are The Cyprus Institute and other such institutions”, she noted.

Prof. Michèle Gendreau-Massaloux underlined the role of the Inter-Academic Group for Development and stated that “the unique geopolitical location of Cyprus is the basis for the future. The Cyprus Institute should be the gateway for Europe and for the Eastern Mediterranean and Middle East region, as the research communities of the region could build around The Cyprus Institute, a core, new wave of interest”.

You can watch the full-day Conference here and the public lecture here. The full list of attendees can be retrieved here.