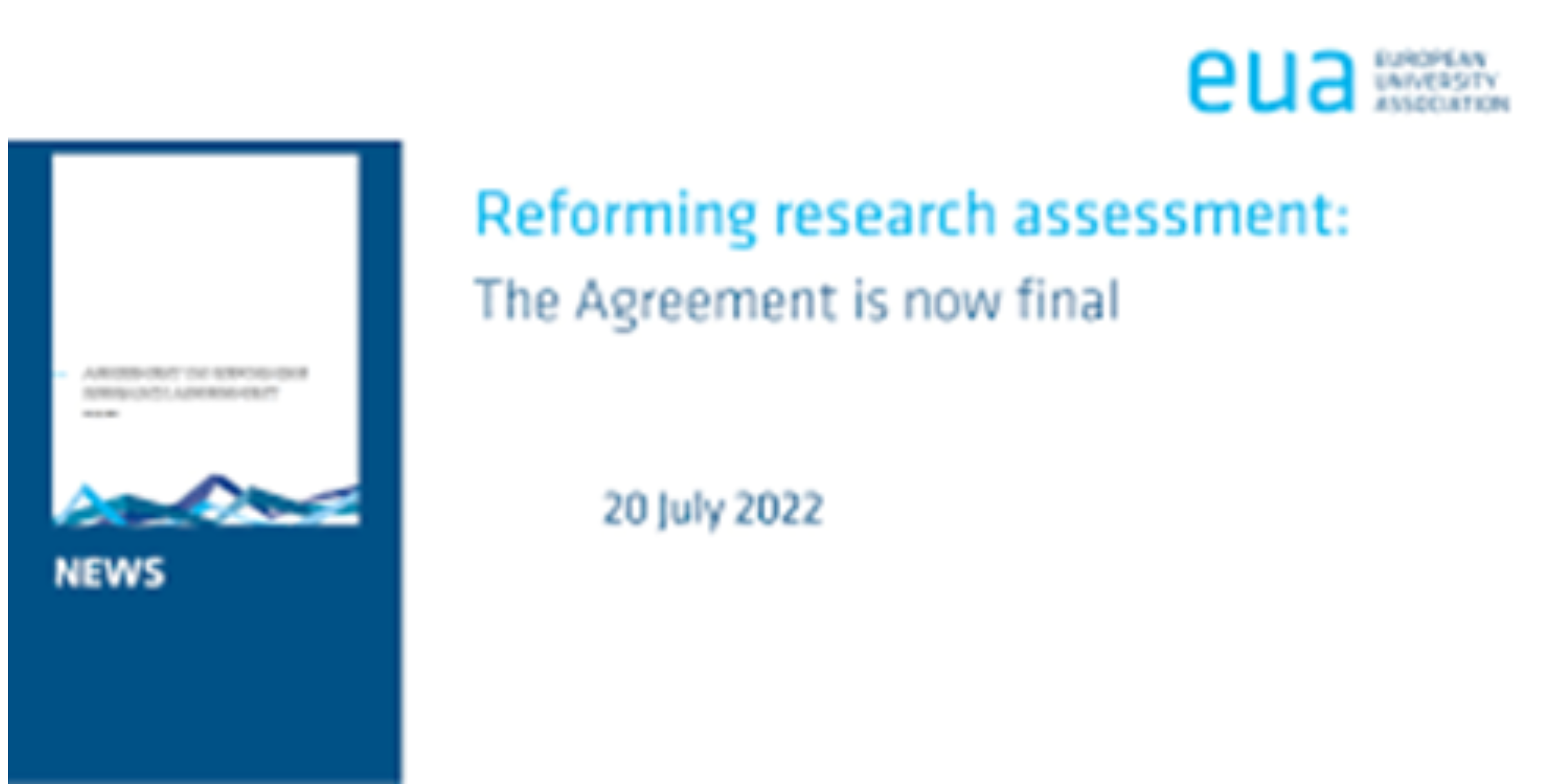 Launched in January 2022 as a co-creation exercise, the process of drafting an agreement for reforming research assessment has reached an important milestone. On 8 July, the final version of the agreement was presented at a Stakeholder Assembly bringing together the 350+ organisations from 40+ countries having expressed interest in being involved in the process. The final Agreement is made public.

Organisations involved include public and private research funders, universities, research centres, institutes and infrastructures, associations and alliances thereof, national and regional authorities, accreditation and evaluation agencies, learned societies and associations of researchers, and other relevant organisations, representing a broad diversity of views and perspectives. They have provided feedback to the evolving drafts of the agreement, as prepared by a team composed of representatives from the European University Association (EUA), Science Europe, the European Commission, and Dr Karen Stroobants, in her individual capacity as researcher with expertise in research on research. A core group of 20 research organisations, representing the diversity of the research community across Europe, also contributed to the drafting process, while EU Member States and Associated Countries have been consulted on the agreement in the framework of the ERA Forum and the European Research Area Committee (ERAC).

The Agreement on Reforming Research Assessment sets a shared direction for changes in assessment practices for research, researchers and research performing organisations, with the overarching goal to maximise the quality and impact of research.  The Agreement includes the principles, commitments and timeframe for reforms and lays out the principles for a Coalition of organisations willing to work together in implementing the changes.

Final version of the Agreement

Signatories will commit to a common vision, which is that the assessment of research, researchers and research organisations recognises the diverse outputs, practices and activities that maximise the quality and impact of research. This requires basing assessment primarily on qualitative judgement, for which peer-review is central, supported by responsible use of quantitative indicators.

The reform movement underpinned by the Agreement and the Coalition aims to be an inclusive and collaborative space to advance together towards a higher quality, more impactful and more efficient and inclusive research system. It offers a platform for piloting and experimentation, developing new assessment criteria, methods and tools, and for joint, critical reflection, exchange of good practices and mutual learning, while fully respecting the autonomy of organisations. Supported by the work of the Coalition, organisations will decide on the steps to take to implement the commitments and the pace of their reform journey, which can vary depending on the context (e.g., national, disciplinary or assessment of individual researchers, research units and research organisations or research projects) and the strategic goals and mission of each organisation.

Organisations involved in research assessment, based in Europe or further afield, are encouraged to sign the Agreement and to subsequently join the Coalition.

The collection of signatures to the Agreement will be launched on 28 September at the Research and Innovation Days, during a plenary session on reforming research assessment, but early indications of signature of the Agreement are welcome. The “Constitutive Assembly”, the first meeting of the General Assembly of the Coalition, is expected to take place in late autumn 2022. A first discussion on the operation of the coalition and of its governance took place during the 8 July Stakeholder Assembly, where details of governing and supporting bodies and of participation and involvement were further specified, including membership of the Coalition being restricted to not-for-profit organisations involved with research assessment. Organisations without legal personality will also be able to sign the Agreement. A closer to final version of the governance documents will be presented and discussed at the next Stakeholder Assembly, planned to be held in October 2022.