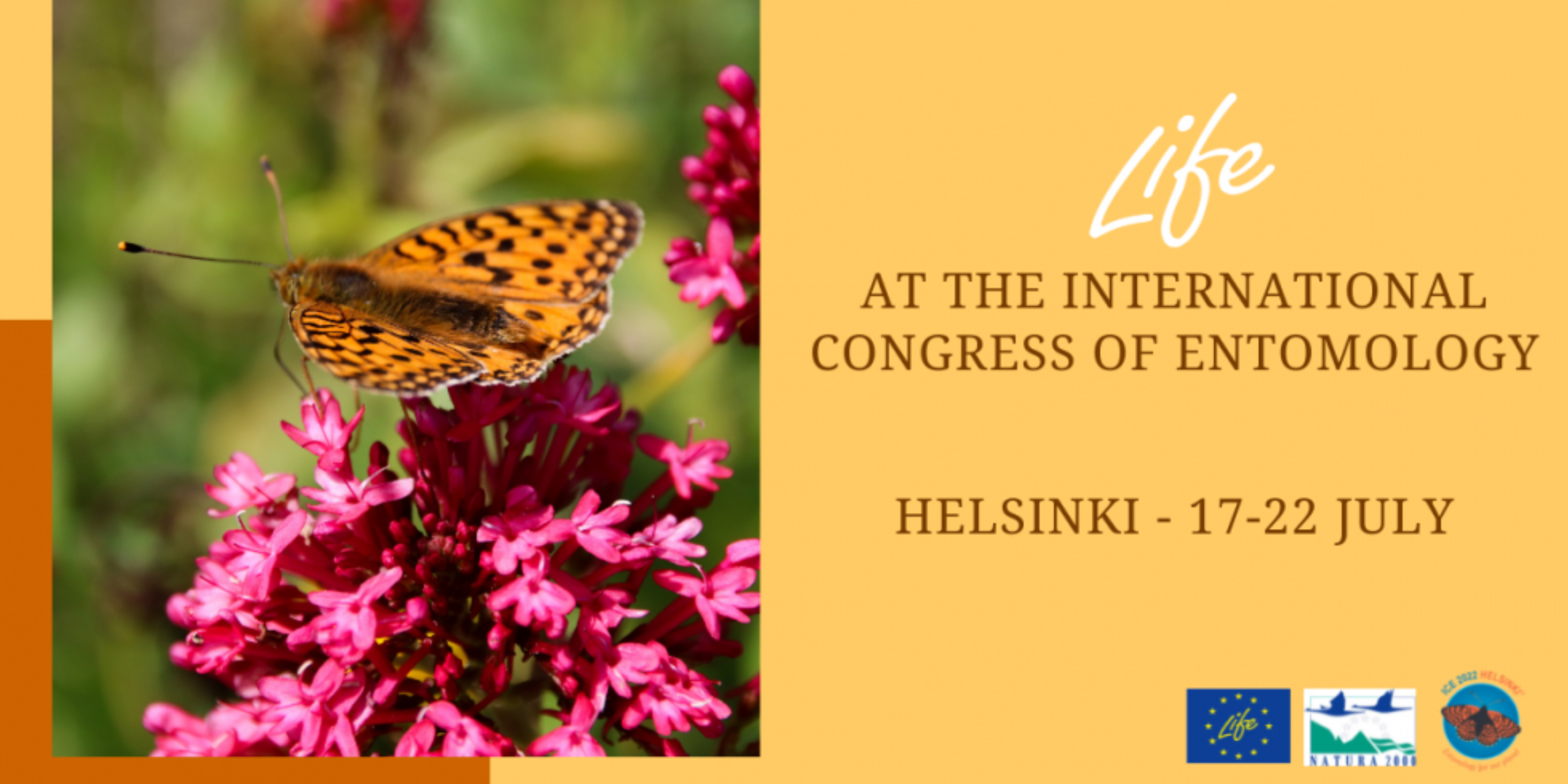 The LIFE Programme will participate in the International Congress of Entomology (ICE 2022) from 17 to 22 July in Helsinki, Finland.

The central theme of the Congress is ‘Entomology for Our Planet’. A LIFE representative will speak during the opening plenary session on ‘Protecting Europe’s threatened invertebrates: Overview of EU policy on the protection of invertebrates and funding opportunities through the LIFE Programme’. 10 LIFE projects will present their own experiences of safeguarding invertebrates in a special LIFE symposium. Find out more about LIFE participation at ICE 2022 in our event notice.

Their plight has been recognised by the EU Pollinators Initiative, which was set up in 2018 to address the reasons behind the decline in wild pollinators and take urgent action. Also, one of the main goals of the EU Biodiversity strategy for 2030 is to conserve and enhance wild invertebrate pollinators. And in June this year, the European Commission proposed a new nature restoration law including binding targets on pollinators.

Since 1992, the LIFE Programme has been addressing the conservation needs of invertebrates through a multitude of projects. See a selection below.

The violet copper butterfly is rare and only found in a few European regions. In the Eifel national park in Germany, some populations are left but often isolated, meaning they cannot move between habitats.

The LIFE Patches and Corridors team is preserving existing and introducing new habitats like wetlands, alluvial forests and flower meadows for the butterfly. They are also helping local populations move back and forth between habitats by introducing stepping stones (patches of land) and ecological corridors between protected areas.

Beetles are crucial decomposers, especially in forests. They also reduce pests and are an essential measure of biodiversity. However, the ground beetle, the laurocho and the ironclade beetle are threatened in Portugal’s Azores islands due to land-use changes and invasive alien species.

The project team behind LIFE BEETLES has set out to enhance the three beetles’ populations, distribution area, and conservation status. Actions include improving the habitats by reviving eucalyptus forests, rewilding existing pastures, planting shrubs and controlling invasive alien species. The team is also carrying out awareness-raising activities to change the often-negative public perceptions of beetles.

Bringing a river mussel back from the brink

Until recently, the thick shelled river mussel was considered extinct in Denmark. However, it was rediscovered in the Odense river in 2004 and the Suså river in 2007. Despite this, these rivers still pose some problems for the mussels. For example, the common minnow and the European bullhead fish that the mussels depend on are lacking.

The UC LIFE Denmark project team has to date, bred and released a lot of common minnow into both rivers. These fish serve as host fish for the mussels’ larvae. The team has also introduced several European bullheads from neighbouring Skåne in southern Sweden. And they have removed a dam in a river near Odense, helping fish to navigate more easily.

Minding the gap in oak habitats

Poor maintenance and management have had a devastating impact on Fennoscandian wooded pastures and meadows. Some sites have been completely abandoned and become fragmented, resulting in various species of beetle disappearing altogether.

The LIFE Bridging the Gap (BTG) project team’s primary goal is to rebuild and reconnect this fragmented landscape. This will help the local hermit beetle, the great capricorn beetle and the stag beetle, which all depend on wood, to thrive.

The team is restoring around 1 405 hectares of wood pasture, an area twice the size of Gibraltar. They are also introducing grazing animals and planting oak trees and bushes. This work will increase the area of oak habitats and reduce the distance between the oak sites. Other actions include building 185 stag beetle habitat piles in warm areas, helping females to lay their eggs on the decaying logs.

In the Western Carpathian Mountains, there was a marked shift from traditional small-scale farming to more intensive agriculture in the second half of the 20th century. This caused the decline of various plant and animal species, including insects.

The LIFE for insects project team is reviving insect numbers through habitat restoration. They are also better connecting isolated populations.

Target species include the stag beetle, the clouded apollo, the large blue, and the jersey tiger. The team expects to restore around 510 hectares of habitats in both Czechia and the Slovak Republic side of the mountains. This area is roughly three times as big as Monaco. Work includes removing shrubs, mowing and grazing, and encouraging small-scale farming by working with farmers and other landowners.