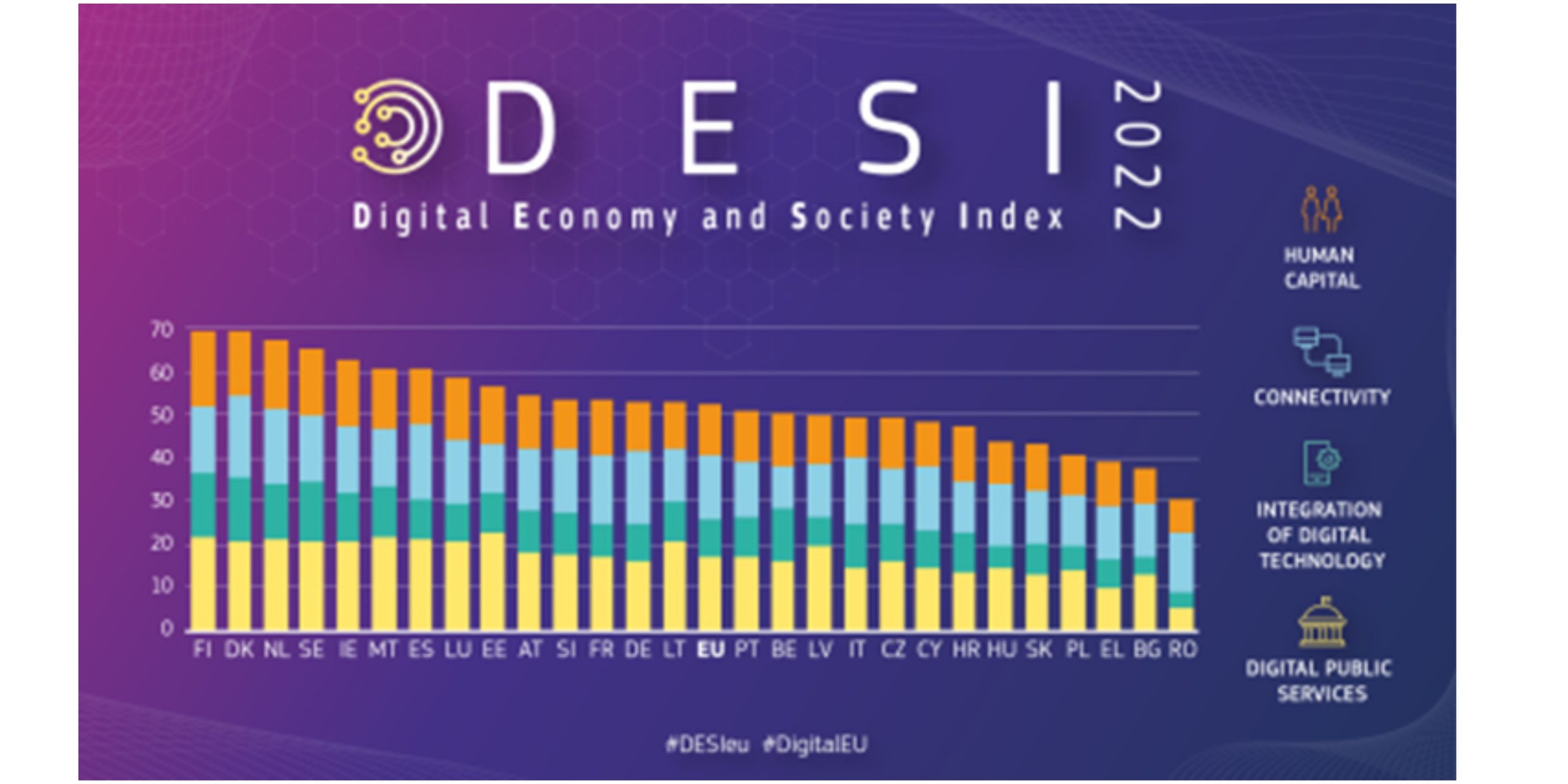 This article analyses the 2022 DESI report to understand what is needed in order to meet the EU’s broadband connectivity targets in rural areas: ‘1 Gbps for all and 5G coverage in all populated areas’ by 2030; and ‘100 Mbps upgradable to 1 Gbps for all households’ as well as ‘1 Gbps for all schools, transport hubs, main providers of public services and digitally intensive enterprises’ by 2025.

The 2022 Digital Economy and Society Index (DESI) report, published this summer, confirms the need to further support and invest in closing the rural-urban digital gap. With more than 60% of households in rural areas still not served by Very High-Capacity Networks (VHCN), which is more than double the proportion in urban areas, there is growing urgency. To reach the 2025 targets, let alone the 2030 ones, accelerating rural VHCN deployment is essential.

The underlying reason for the rural-urban connectivity gap’s persistence is the well-known combined effect, for private telecommunications companies, of smaller customer bases and higher deployment costs in more sparsely populated, remote and/or rugged areas. The resulting market failure leaves communities in such areas under-served and reliant on alternative approaches – self or State-driven – and the challenges of deploying network infrastructure remain.

To overcome the persistence of the rural-urban connectivity gap, it is essential to identify where investment gaps can be foreseen. We have analysed the data to forecast the deployment scenario that can be expected, following the current trend in VHCN infrastructure deployment. We have used historic figures for basic broadband, Next Generation Access (NGA; supporting speeds of at least 30 Mbps) as well as VHCN.

Figures from 2014 to 2021 suggest that overall broadband deployment is following an ‘S-curve’ (Figure 1, below), whereby coverage grows slowly at first, then accelerates, until finally levelling off.

Coverage starts near 0% before entering its acceleration and linear-growth phases, during which most of the ‘average-cost’ households are connected (phases 2 and 3, above). As deployment enters phase 4, we see growth start to slow as more challenging households struggle to get connected. Finally, coverage almost ceases to grow as we reach ‘deployment saturation’, when the households deemed too costly to connect remain uncovered (phase 5).

The three graphs taken from the DESI 2022 report, show how this deployment trend is expressed across different types of infrastructure: fixed broadband, NGA and VHCN.

In rural areas, fixed broadband (Figure 2, above) has passed 90% coverage and has entered the penultimate growth phase: deployment is now focusing on the more challenging households (phase 4).

Approaching 70% coverage, rural NGA deployment is not far behind.

By contrast, rural VHCN coverage has just accelerated into the linear fast-growth phase: more challenging households to reach will have to wait a bit longer before deployment targets them.

The European Joint Research Centre (JRC)’s recent study, ‘Broadband accessibility and quality connection in Europe by urban-rural typology including remoteness’, analyses the quality of broadband connectivity in rural and non-rural areas across the EU’s 27 Member States using the average download speeds as recorded by Ookla, the world’s leading speed test company. While the definition of rural areas may differ slightly in the JRC study and the DESI report, the study nonetheless demonstrates how significantly broadband performance is impacted by VHCN coverage, although in some cases the correlation can be clouded, possibly due to delays between infrastructure deployment and service take-up by users.

The JRC study looks at the performance gap, or the difference in average download speeds (Figure 6 below), while the DESI report looks at the coverage gap, or the difference in percentage of households with a VHCN connection. While it is not possible to directly compare the two, one can expect that Member States with a significantly lower rural-urban coverage gap will exhibit a significantly lower performance gap.

Indeed, we can observe a rough correlation, and where discrepancies exist, these may be explained by service take-up considerations. In some instances, for example, we can observe that significant quality gaps are present even in situations with relatively small coverage gaps, such as in Malta. This may, however, be accounted for by the natural delay between VHCN deployment and service take-up by end users: high VHCN coverage means that a large proportion of users have the possibility to subscribe to VHCN services, but it is only when many of them do take up those services that the average download speed across all users is raised. In essence, more recent VHCN coverage gains may not immediately translate to improved performance: for a period of 1-2 years after deployment, it is typical to see download speeds increase only gradually, as take-up of the service grows. This delay is often more pronounced in areas with lower digital maturity and high relative prices.

Take-up considerations may also explain the conflicting figures of high rural-urban connectivity gap but low performance gap (better urban coverage but more comparable overall speeds). In Estonia, Germany and the Czech Republic, VHCN coverage is only recently growing to significant levels, especially in non-rural areas (as evident in the DESI report’s country data tables). As such, their non-rural areas are in the early stages of service take-up and average performance in those areas will only increase as adoption grows. As take-up increases, the rural-urban performance gap would be expected to increase, as the VHCN-covered areas begin to experience higher average speeds.

VHCN deployment does indeed lead to improved broadband performance but in a less immediate way than one might expect, possibly hinging on service take-up by end users.

When analysing VHCN, it is also relevant to look at the deployment of fibre-to-the-premises (FTTP): the future-proof, capital-intensive VHCN infrastructure option. Particularly interesting to note is that FTTP coverage is higher in rural areas than in non-rural areas for Denmark and the Netherlands, according to DESI 2022.

This may reflect the fact that alternative operators, traditionally keener on FTTP than incumbents, avoid head-on competition with cable operators and incumbents, who focus on the more lucrative urban areas.

In the case of locally-led broadband deployment initiatives, FTTP is also a regular choice. Such initiatives usually come to the fore in the rural areas that the market is not reaching, as seen above in phases 4 and 5 of market-driven deployment. Many examples of this may be seen across the EU, where local champions, demand aggregation and anchor tenants are critical elements that make projects financially sustainable. Their success in closing the final gap (at the end of the infrastructure deployment trend, seen above) is indeed recognised at EU-level and promoted through many initiatives in order to encourage the replication of good practices (see the Commission’s dedicated video playlist, Rural Broadband Handbook, and European Broadband Awards).

As we have seen, the current trend indicates a risk that a significantly lower proportion of rural households will be connected, and they will be connected significantly later than in non-rural areas. Locally-led initiatives, supported by properly aimed EU and national funding, may ultimately be critical in closing the gap for the most rural and remote communities.